Did you know our animal mosaics are “alive”? Mosaiculture is the art of using multiple live plants to create a single artistic shape or design.

At Assiniboine Park, we have been creating mosaics in the shape of animals for the last 11 years, with the most well known being our seven foot tall frog mosaics found in the Nature Playground.

In 2019, we added a fan favourite, Norm the polar bear. Norm is almost 15 feet tall and 20 feet long and greets visitors to the Assiniboine Park Zoo. We also have some farm animals that can be found near Aunt Sally’s Farm in the Zoo.

To create these living statues, we start with a metal frame in the shape of the animal we are creating.

The frame is then wrapped very tightly in a durable, water permeable mesh fabric of different shapes, to form a skin of sorts. 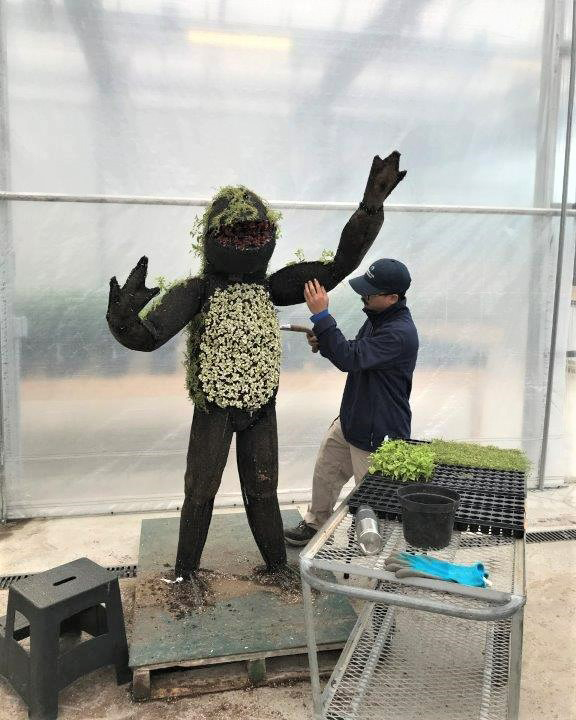 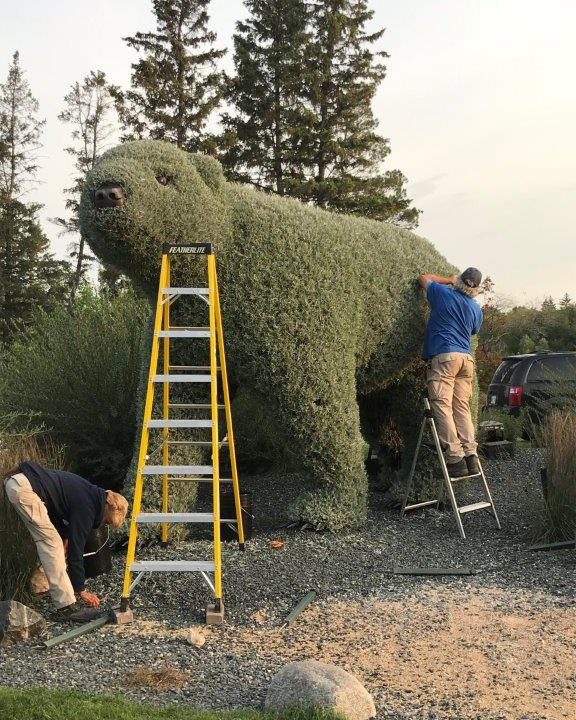 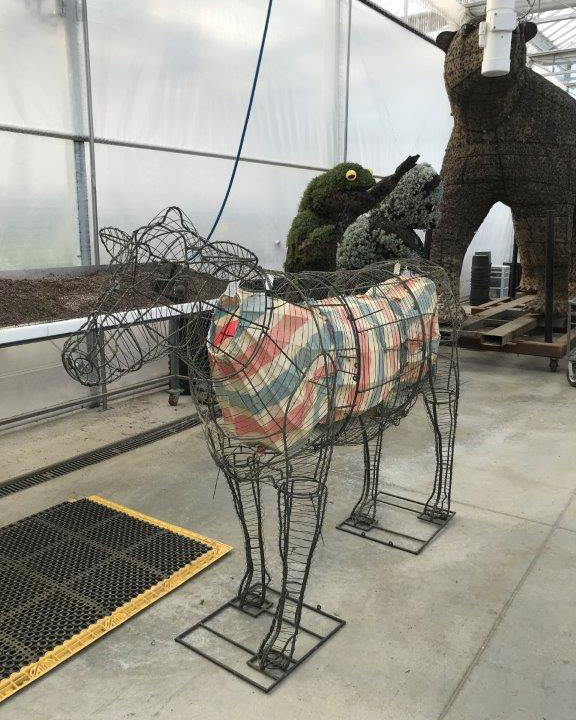 The process is like sewing an article of clothing, except the material is attached directly to the metal frame with staples to hold it snuggly to the body. We start attaching the fabric from the bottom up and then pack the form as densely as possible with a very porous potting media that includes a slow-release fertilizer.

The metal forms are wrapped and stuffed in several parts that can be put together when it is time to add plants.

To plant the figures, we use a tool called a dibber or dibbler. This is a curved wooden handle with a pointy metal “nose” that pierces the fabric and creates a hole in the potting media, where we can insert a small plant plug. The distance between the plants varies according to the different varieties of plants used. 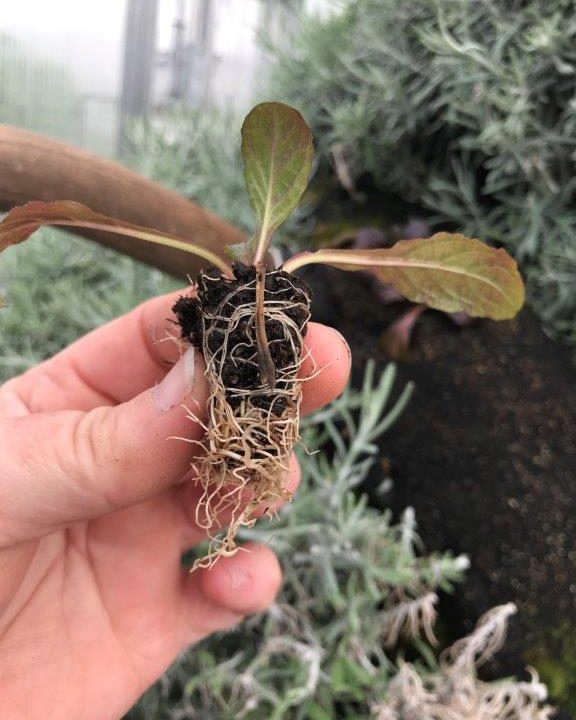 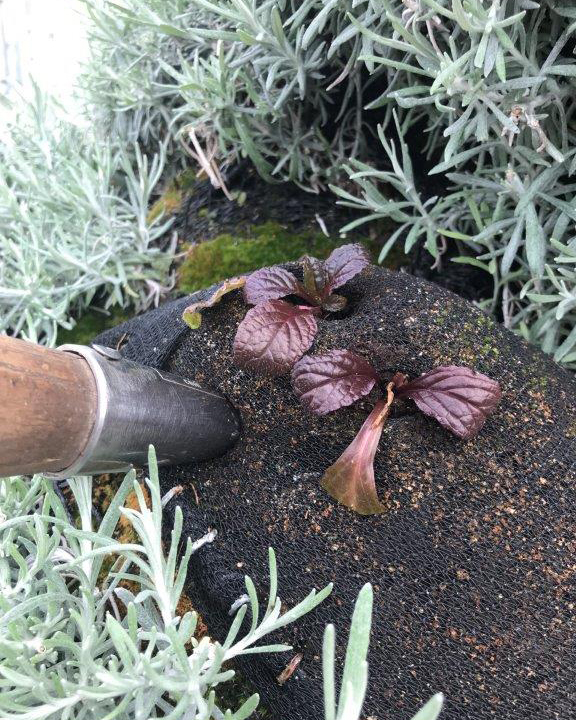 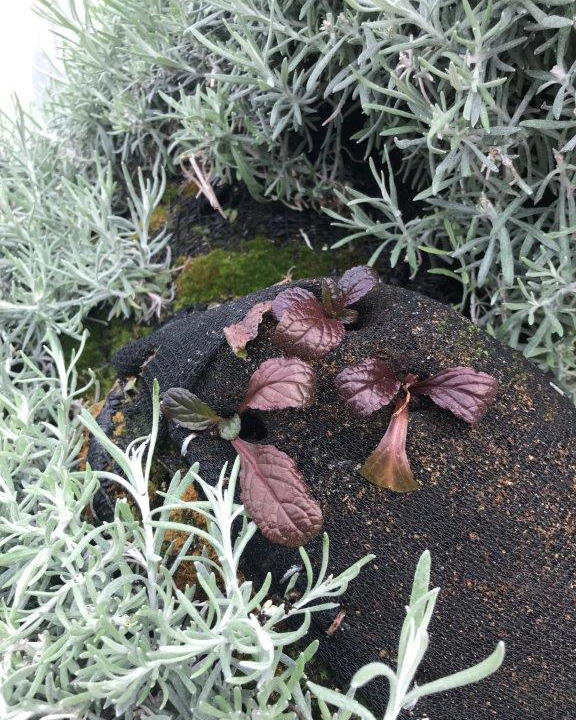 The mosaics are prepared in the greenhouses about two months before the weather outdoors is nice enough to move them into the gardens for the summer. Norm weighs close to 6000 lbs when planted and watered – much heavier than a real polar bear. We must use a giant crane and a large trailer to move Norm to the Zoo.

Norm is planted with silver threads helichrysum, also called curry plant for its distinctive scent. The frogs are planted with an assortment including golden oregano, red creeping thyme, ginger mint, and hypoestes, which is also known as the polka dot plant.

During the heat of summer, the mosaics are watered every day, and a crew of gardeners visits them weekly to replace any damaged plants and keep them trimmed to the correct shape. In the fall, before we receive a heavy frost, the mosaics are brought back to the greenhouses to overwinter before coming alive again in the spring.

This year we tapped some of the Manitoba maples at Assiniboine Park to test out the amount of sap we can collect with the hope of one day making maple syrup!

Learn how to mindfully connect with nature

Spring is finally here and with the promise of warmer days, many of us are spending more time outside and looking for ways to reconnect with nature.

Spring has Sprung in the Greenhouse

Here in Winnipeg, we may be having one of the coldest and snowiest winters on record, but the greenhouse at Assiniboine Park is a bright and cheery oasis bursting with colour!