Caterpillars are Coming out of the Freezer

It is an exciting time of year for our Conservation and Research team! Precisely 279 endangered Poweshiek skipperling larvae and, for the first time ever, 26 endangered Dakota skipper larvae that were raised here at the Zoo are coming out of the freezer, where they spent the winter. Both the Poweshiek skipperling and the Dakota skipper are small prairie butterflies whose populations have recently experienced dramatic declines.

These individuals are part of the Assiniboine Park Conservancy’s head-starting programs for the endangered Poweshiek skipperling and Dakota skipper butterflies in collaboration with local and international partners. Each summer, a small number of wild female butterflies are brought to the Assiniboine Park Zoo for a short period of time to lay eggs. After laying, the females are returned to their natural habitat. Once the eggs hatch, we provide optimal growing conditions for the caterpillars, including overwintering in a climate-controlled incubator, until they are ready to be released as adults the following summer.

In the wild, these little caterpillars hunker down under snowpack and wait for spring, when conditions allow them to continue their development to adulthood (a butterfly). We are all familiar with hibernation, but in insects this process is called “diapause”.

The Dakota skipper is a shelter builder, meaning that soon after hatching it creates a tiny house out of its silk and grass. These Dakota skipper caterpillars will wait out the winter in this shelter. The Poweshiek skipperling will secure itself to a blade of grass close to the ground to overwinter. During the winter here at the Zoo, both species are placed into a freezer held at a constant -4°C to mimic conditions that they would experience in the wild under the snow. They are removed when ambient outdoor temperatures are consistently above 0°C at night, typically late April, or early May in Winnipeg. 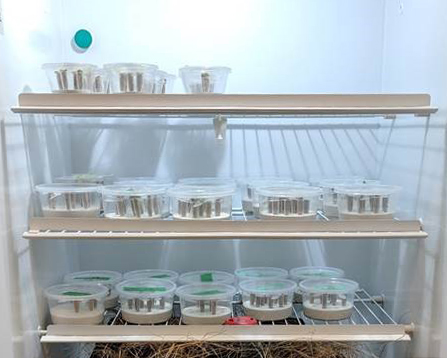 Both species are placed into a freezer to mimic winter conditions 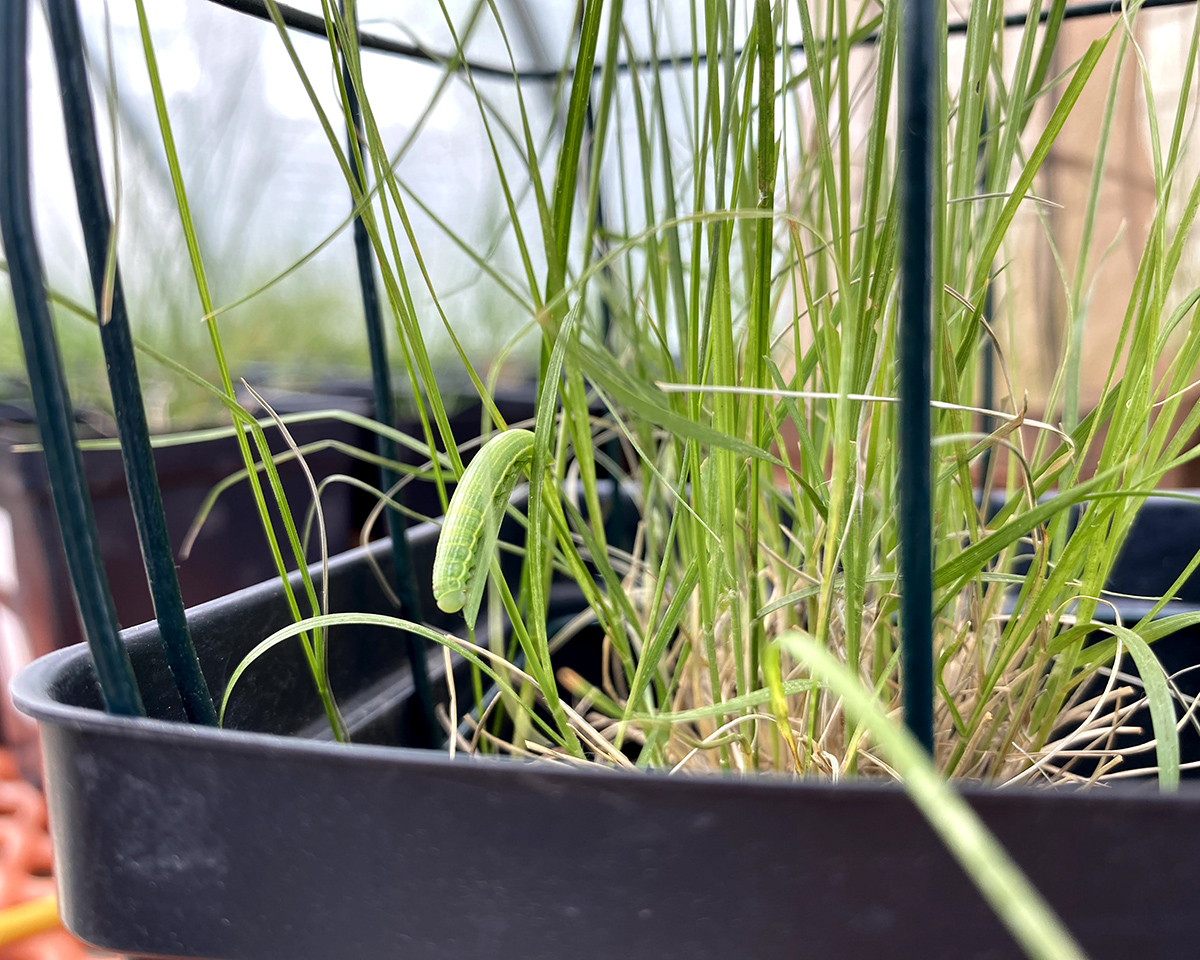 In the spring, larvae are brought out of the freezer and placed onto prairie dropseed grass.

“Here in Manitoba, we have an amazing natural heritage of grassland ecosystems and the species that inhabit them. Breeding and raising these butterflies at the Zoo provides us with an incredible opportunity to increase the number we release each year, helping to bolster wild populations and even potentially introducing them to new areas within the available grassland habitat in Manitoba,” said Ashleigh Westphal, Research Conservation Specialist.

Genetic studies are another way the Zoo is contributing to research of the Poweshiek skipperling. Amber Papineau, Research Conservation Specialist, studies the genomics of Poweshiek. The genome is a term we use to refer to the entire genetic makeup of an animal. This information can be used to monitor the genetic health of populations and estimate their resiliency to environmental change.

Saving these species from extinction is crucial and we are happy to play an important role in the conservation of species native to the tall-grass prairie, an endangered ecosystem. If you would like to learn more about the Poweshiek skipperling butterfly, check out this interactive Story Map “Plight of the Poweshiek”, created by Adam Grottoli, Research Conservation Specialist.

The conservation efforts for the Poweshiek skipperling are a collaborative effort between the Assiniboine Park Conservancy, Nature Conservancy of Canada, Minnesota Zoo, John Ball Zoo, US Fish and Wildlife Service, University of Winnipeg, and other partners in Canada and the United States.

Beluga are well suited to the cold, they have a thick layer of blubber that can account for up to 40% of their body weight!

A Year in Review: Conservation by the Numbers

Our Conservation & Research team works year-round on valuable projects here at the Zoo and out in the field. Here's a round-up of what this team has been up to in 2022!

Conserving Polar Bears in the Wild

Here at the Zoo, our Conservation & Research team is dedicated to learning from the polar bears in our care and assisting with conservation efforts in the wild.